Quotes About the Bible

“The Book of Proverbs in the Peking Bible is great! Reading through it, I glean so much. The translation is very well done and easy to understand." - Sister Zhu, China.

"The Peking Committee Bible is more accurate and understandable than other translations. It is a great help to those wishing to read and study the Bible." - Sister Guo, China.

"Before, when I read Romans and James, it seemed like they contradicted one another and were very unclear. The Peking Committee Bible's notes on James are the best explanation. " - Sister Zhang, China.

“Since I began reading the Peking Committee Bible, so much of what I thought was obscure and hard to understand, has become crystal clear and easily understood. It was as if the Lord had opened my eyes! Even though it is a 90-year old Bible, it is clear and understandable, and its contents are profound and concise. " - Sister Zhang, China.

“Praise the Lord by His grace He was able to bring a 100-year old complete Bible, the Peking Committee Bible, into our midst! A few months ago, I began to systematically and prayerfully read God’s Word and obtained great encouragement. In reference to its grammar, its doctrine, or its usefulness, all have given me new insight to the Bible and its meaning. The Old Testament is no longer hard to understand, the New Testament is clearer than its ever been, and the Bible itself is so easy to use. I am especially thankful for its pure source, coming directly from the Greek Received Text, confirming our faith in the Word of God.” - Brother Zhang, China.

“Since our Church began using this Bible, God has used His Word to open the hearts of the many lost people and has strengthened our people’s belief in the Lord. I believe this Bible will change China, whether saved or lost, all will benefit from this Bible! I pray the Lord will bless and keep Pastor Dunn and his family, I pray God’s perfect will in their lives, Praise God! Glory to God!” - Brother Zhang, China.

“Thank the Lord that the Peking Committee Bible was brought into my life! Even though, when I first started reading it, I was not accustomed to it, and I felt it was not the same as what I had used before, I was still willing to pray and seek God’s help in accepting it. The Lord eventually opened my eyes, allowing me to see the importance of His complete Word, He revealed answers to many of my previous doubts. The Lord allowed me to truly understand that He wanted me to have His entire Word, thus enabling me to have a closer walk with Him. Now, whenever I recall the many unclear places and confusing passages from before, I happily open my Peking Committee Bible to see what God said. I am so grateful for the way that God has opened my heart to His Word.

Praise God that the church I attend also uses the Peking Committee Bible. It is amazing to see lives changed because of it. I am so thankful to Pastor Dunn for taking a stand to preserve this Bible.” - Sister Duo, Southern China.

“The Peking Committee Bible is God’s Blessing to us, as its words are distinct, accurate, and pure! Although we are unsure why, for 90 years this Bible was not known among the Chinese, it certainly has caused our faith to become more sure. It is my prayer that God will propagate this Bible throughout China, helping Chinese Christians to reform their doctrine and live their life earnestly devoted to serving the Lord.” - Sister Zhao, China.

“The Peking Committee Bible was translated earlier than any other Mandarin translations and therefore holds important significance in regards to historical translation of Scriptures in China. It helps the Chinese to understand God’s truth, be shown the truth of salvation, and enjoy the blessing of eternal life. The New Testament is particularly clear and easy to understand; rarely will you find unclear or hard to understand passages. Truly it allows us to know God’s intent.” - Brother Liu, China

“The Peking Committee Bible’s meaning is clear-cut. It takes all the mistranslations of the former Union Bible and reveals them with perfect clarity.” - Brother Huang, China

“Reading the Peking Committee Bible is an education in its own right.” - Sister Hu, China.

“I feel in this world of Pantheism, only this edition of the Bible clarifies the difference between the true God and false gods.” - A Chinese Brother, China

“When I read the Peking Committee Bible, I felt it was translated very meticulously and  therefore easily understood. The Peking Bible also has many words with which we are unacquainted with that are very different than the vulgar speech of modern society. Its words are archaic and detailed. When reading, it is much easier to comprehend the elegance of the words of God.”  - A Chinese Pastor, China

“The Peking Committee Bible’s book introductions which tell who the author is, when it was written, and the main theme of the book, are very helpful. They help me to clearly understand God’s words. Because its words are not the common slang of today, I feel the Peking Bible’s descriptions and meanings are expressed just right! because I am aged and unable to see clearly, I am thankful that the characters in this Bible are easily legible; furthermore and of greater importance is that it conveys truth. It is a unique Bible.” - An elderly Sister in Christ, China.

“Reading the Peking Committee Bible, I feel that its greatest uniqueness is its use of ‘Lord of Heaven’ where other versions us ‘gods’ to convey the idea of God. ‘The Lord of Heaven’ takes the concept of Jehovah, the one and only true God, and expounds it incisively and vividly. Also, 1 John 5:7 distinctly clarifies the Trinity; such an important truth is not found in any other Chinese translations. The Peking Committee Bible uses the purest and most succinct Chinese words, it has the highest degree of exactness and completeness, and therefore allows me to more fully understand the words of God. Truly it is a great Bible worthy of your possession.”  - A sister in Christ, China

“Praise God for leading Pastor Dunn to give us the Peking Committee Bible, enabling us to obtain God’s Words.” - Brother Guo, China.

“The Peking Committee Bible in China, as well as teaching concerning the Textus Receptus is quite rare. When I first opened the Peking Bible and realized it was the same as my King James, and that God had preserved his pure Spirit-Breathed words, my love for God was rekindled.” Pastor Zhang, China.

“The Peking Committee Bible without a doubt is the most remarkable Chinese translation in Mandarin today. It is concise and comprehensive, beautifully translated and elegantly fluent in its message. Moreover it is translated from the reliable sources of the Masoretic and Textus Receptus texts. I thoroughly enjoy reading it, meditating upon it and obeying it.” - A Brother In China.

“Praise the Lord for giving us these precious words, and allowing us who sat in darkness to see the light!” - A Christian.

“The Peking Committee Bible is the best Mandarin Translation I have read. Not only are the very words accurate, but it also preserves the scent of the old translation era in China. The term ‘Lord of Heaven’ correctly expresses the Lord’s primary attribute - namely, the one and only Lord in Heaven.” - A Brother In China.

“Of the 30 translations that I have looked over in Chinese, I have never found one as clear and faithful to the meaning of the Bible as the Peking Committee Bible. It truly is a gem of translation work and finally allows the Chinese to have a Bible that makes sense in Chinese, rather than catering to English Bibles, whose goals are literalism rather than translation. - Pastor Dunn, China.

Welcome to the Peking Committee Bible Website. This website is dedicated to information surrounding the very first translation of the Holy Scriptures in Mandarin Chinese. Forty years before the Union Bible (which is currently the primary Bible in China) made its emergence in 1919, a translation from the Hebrew Masoretic and Greek Textus Receptus texts, appeared in China. It was translated into the common man’s Chinese and is the only Bible today on the market that is translated directly from the Hebrew and Greek Manuscripts that underly the King James Bible. The Peking Committee Bible is back in print for the first time in nearly 100 years. It is currently being distributed in Mainland China and is being used in various churches in many places, even as far as Singapore and Taiwan. The Peking Committee Bible has left an indelible impression on translation and the Chinese language itself. We welcome you to peruse this website to better understand its history and why it is still regarded as the best translation of the Bible in Chinese to date. You will find mp3s, articles, booklets, and the Bible itself on this site. We are constantly providing updated material with more detailed investigation into this literary masterpiece, so we encourage you to bookmark this site and frequently utilize its information. May the Lord bless you as you become acquainted with the Peking Committee Bible. 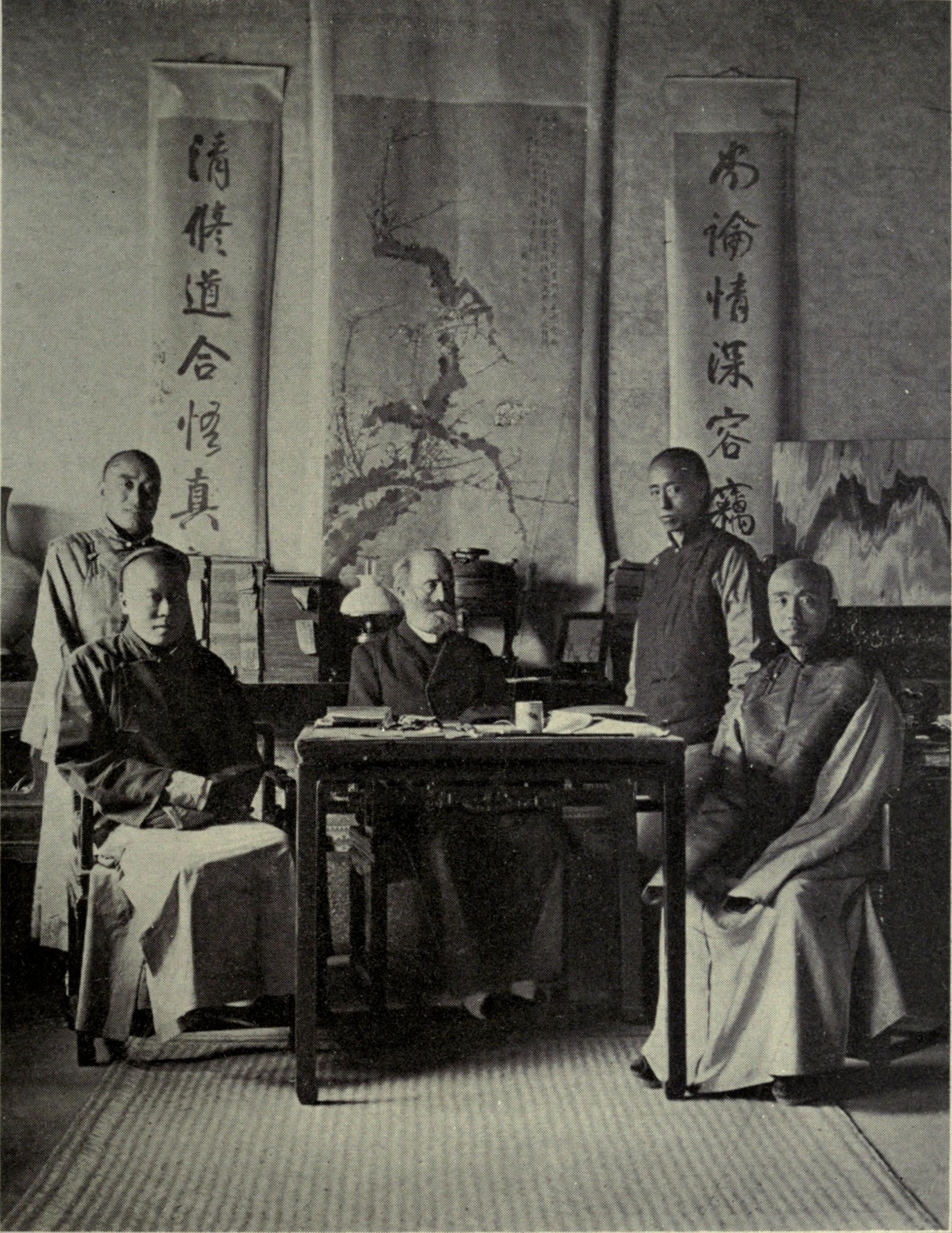